Report back: April 23rd All Out ATL against the Klan

On Saturday, April 23rd 2016, Hundreds of people including three anti-fascist groups from the Torch Anti-Fascist Network gathered at Stone Mountain park to confront the KKK and supporters of white pride and white supremacy.

After much planning and preparation, the march began down Robert E. Lee Blvd. and was immediately met with a line of police at the front parking lot entrance. Realizing that the heavy police presence at the first entrance meant trouble, the march turned left and headed down the street to the main gate, which was also guarded by police. At this point, we decided for the first of many times that day to evade through the trees, getting around the fence and into the park. Upon entering, we were greeted with police screaming for us all to take our masks off or risk arrest, but understanding the importance of anonymity in the face of police, media, and the racists/fascists, many of us initially responded with a simple “fuck you” and dodged around the sparse number of cops, as well as de-arresting our comrades along the way, until we got through to a small field right inside the park. This is when things broke out into a frenzy, as cops attempted left and right to arrest anyone wearing a mask, we tried to de-arrest everyone we could while simultaneously trying to regroup and decide what the best tactical move forward was. It was in this field that eight out of the nine people that day were arrested and charged with wearing a mask in a public park.

After finally making it out of the field, it was decided that the best thing to do tactically was to go off the main road, taking a trail and parallel train tracks deeper into the park under the cover of the trees, which not only helped flank the cops who were out in the open, but also partially avoided surveillance from the police helicopter hovering overhead. After getting as close as we could to where the KKK rally was held via trail/track, we emerged from the cover of the trees to head back down Robert E. Lee Blvd, only to face a line of police decked out in riot gear grasping wood batons. Once again, we regrouped and tried to figure out how to move past this line. At this point many of the more peaceful/liberal activists showed up and started telling people that were wearing masks that they should take them off, and began to talk the march into getting on the sidewalk in hopes that the police would let us through, though we knew that was just not going to happen. Had the entire march moved to the sidewalk the line of riot police would have likely swung like a door, kettling us to the sidewalk and arresting anyone masked up. Having realized this, we stayed in the street and convinced others to come back off the sidewalk. 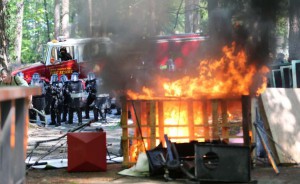 After some time we decided to cut through the woods again and got on to the final street leading right to where the KKK rally was. Our group along with some others got on to the street first and saw we had a running chance to make it to where the KKK was so we did just that, sprinting down the street. We then realized that we were way ahead of the rest of the march and that there was another line of riot cops running to block the street, and had our groups run past the point where there was soon to be riot cops, we would have been cut off and arrested in a heartbeat. Knowing this, we stopped and waited for the rest of the march. We then got word that there was a dumpster on a small path near the road we were on. So we got to it and first tried to roll it downhill to where the riot police line had formed, to no avail. We then started using whatever we could get out of this dumpster against the line of cops. Bigger things, such as old TV’s and pallets, were used to build two barricades, while smaller things like pieces of wood, broken grills, and other such objects were thrown at the police as well as any rocks we could gather. People began shooting/ throwing fireworks at cops and using signal flares to light fires as well. After clashing with the cops for a little while, and fighting with the liberal/pacifist protesters who couldnt respect our tactics, we flanked the cops once again, arriving at the final standoff with police and all within visible distance of the Klan rally. This is where you see most of the pictures and news reporting come from. 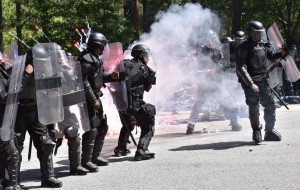 After evading through the trees for the final time, we came out of the tree line, at the edge of a huge parking lot, of which the Klan rally was being held on the other side. At this time many groups showed up such as the Bastards MC, the Huey Newton Gun Club, and some other black power groups as well as members of various street gangs such as the Bloods and Gangster Desciples. This is where all the chanting, demanding, and sign holding took place. After about an hour or so of people chanting while the riot cops made two lines to defend the Klan, everyone started to pack up and head back to the parking lot.

On our way back, we saw about tree helicopters land around the racists inside the rally, of which there were only a couple dozen. People could not believe that the racists were actually going to be airlifted out of there, but we could not help but see this as a telling sign of our strength. We had raised so much hell, burning things in the street and blocking off their only routes out, that the only safe way out for them was to be airlifted. On our way back, we also witnessed the amount of people who also couldn’t get in to attend the KKK rally. As the racists left in their cars, some rolled their windows down and sung confederate songs, some yelled out “black lives dont matter!” and some displayed confederate flags on their cars, this was a mistake. As they drove past their cars got hit with rocks, and some were stopped in the street, some having their flags ripped off their car. One was so invested in yelling racist statements at people of color they crashed their car, and then were immediately confronted and showered which rocks afterwards.

All in all, this Klan rally was supposed to have hundreds, and ended up having only a couple dozen. And that couple dozen was probably scared shitless of the number of people marching, fighting riot cops, and running through the woods just to get to them. Had they not had the overwhelming amount of support and resources from the state to defend them, they would have had a very, very bad time. April 23rd should serve as a warning to racists, fascists, and bigots everywhere, if you try to organize, if you try to hold rallies, if you try to do anything to spread your shit, there will be opposition, resistance, and violence. 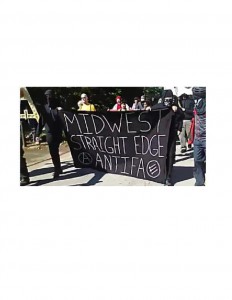