Michael “Iron Balls” McArthur is a 59 year old Neo-Nazi living in Berwyn, IL. He is originally from Copalis Beach, WA. We know he is a Neo-Nazi because of his racist youtube rants 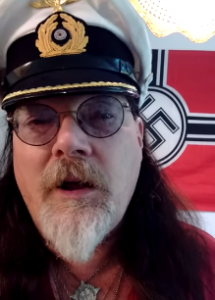 . In one of them, he calls himself a National Socialist while standing in from a swastika flag, which we assume is located in his apartment. He calls himself “Iron Balls” because he lets girls kick him their hardest in his balls, and has been on the Steve Gadlin’s Star Makers “performing” this wonderful routine. He also does Tarot Card readings and was at one point doing them at Cigars and Stripes on Ogden Ave. in Berwyn. We are unsure as to why, but he is no longer able to do his Tarot card readings there. Because of this, we are also unsure of how Michael is making his money, although we do know that he is trying to start his own haunted cemetery tour. According to an article on the internet Michael McArthur once forced a 17 year old into some unwanted sexual situations (see here). According to her, he has continued to harass her via email.

For these reasons, we were happy to hear that he allegedly got his face soaked in piss by some antifascists.

“On July 29th, 2015, Michael “Iron balls” McArthur, a self proclaimed National Socialist from Berwyn, IL was greeted with a face full of raunchy antifa piss in front of his apartment. (3137 Oak Park Ave apt# 107) He has been let go from his Tarot Card reading at Cigars and Stripes and spends his time at the YMCA off Oak Park or the Berwyn Public Library. Fuck nazis!”