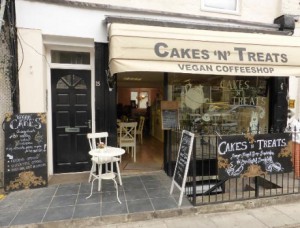 UPDATE: We have received word that “Cakes “N” Treats” has officially been shut down.

Anti-fascists in London are calling for an active boycott of a vegan cake shop in Camden which they claim has links to a violent gang of Italian neo-Nazis.

There’s a vegan cupcake shop in Camden which opened in August last year called Cakes’N’Treats, which anti-fascists in London are calling to be boycotted for links with a gang of violent Italian neo-Nazis. They don’t want anybody (vegan or not) to spend money in there until their happy links with the gang are broken. The gang are responsible for violent attacks in Italy and now stalking the streets of North London, causing trouble. London Anti-Fascists told us they are calling for an “active boycott of Cakes’N’Treats, until we are assured that the links between [owner] Kim K and the neo-Nazis are broken.”

It may not feel like it but the capital has a booming economy compared to those of stagnating European countries. This has led to large-scale migration of Europeans to the city with hundreds of thousands arriving over the past five years. Among those moving to the UK have been far-right nationalists of various nationalities. For example, the influx of Eastern European migrants has included Polish fascists Zjednoczeni Emigranci and Hungarian Jobbik supporters. London has also been host to whole range of Italian fascists in the past, from your regular bonehead to investment bankers and state-backed terrorists. The latest Italian to turn up in London with nationalist tendencies is a guy called David. He works in the shop, serving customers vegan cupcakes.

An investigation by London Anti-Fascists claims David is a neo-Nazi sympathiser and reveals he is drinking buddies with a dangerous gang of violent Italian neo-Nazis. Back in their native Italy these neo-Nazis regularly attend concerts organised by the secretive neo-Nazi music network Blood & Honour and they have been responsible for a string of vicious attacks against left-wingers. 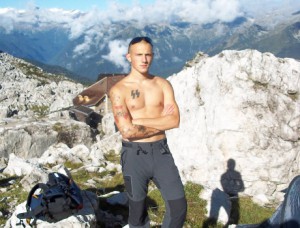 A leading member of the group is Elia Rizzo (pictured above) who has a Nazi ‘SS’ drawn on his chest. Rizzo has visited London twice in the past two years and on both occasions David has gone out drinking with him. In one photograph posted on Facebook from November 2013 David can be seen posing with Rizzo with both of them wearing fascist t-shirts – in other pictures David can be seen posing happily with other known neo-Nazis. 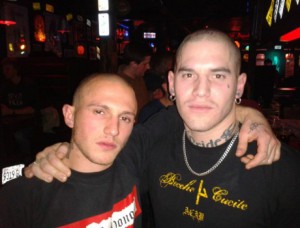 Rizzo and David out drinking in London, Rizzo is wearing a Blood & Honour t-shirt, David is wearing a t-shirt with a fascio rune made by a fascist label.

The group Rizzo and others are part of is called “Pavia Skins” after the posh little university town of Pavia in the Lombardy area of Italy. They hold Blood & Honour gigs where neo-Nazi bands from across Europe play to groups of boneheads who make Nazi salutes while throwing themselves around. Other activities have included visiting World War II cemeteries and memorials, such as the German one at Futa Pass, to pose with banners supposedly paying their respects to the soldiers who died defending Hitler’s Third Reich. 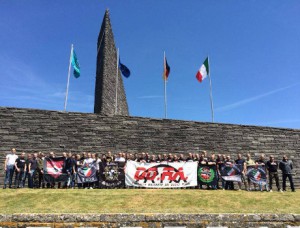 Italian neo-Nazis, including the Pavia Skins, at Futa Pass.

Another bonehead who was part of the group and regularly goes drinking with David is fascist tattooist Luca Scuro. Like David, Scuro has migrated to the UK, working at Hellcats Tattoo Parlour in Hinckley, Leicestershire. Back in his native Italy, Scuro was fined for taking part in a violent assault on a group of young left-wingers, leaving one of them with a fractured septum. 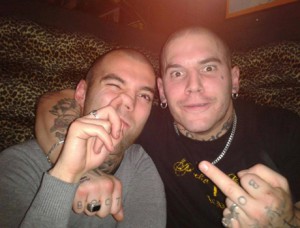 David and Luca Scuro on a night out in Camden.

Scuro’s brother, another of David’s occasional fascist drinking buddies, Luigi, has also come into contact with the Italian justice system. Getting into trouble after threatening a left-winger with a knife. If you’re wondering what motivates the Scuro brothers to engage in violent attacks on the left, Luigi has a tattoo of Mussolini on his back (see below).

Cakes’N’Treats is owned by 30-year-old Camden resident Kim K – who also happens to be David’s girlfriend. Originally from Germany, Kim migrated to London after being supposedly outed as having links to Italian neo-Nazis by German anti-fascists on activist website Indymedia. At the time the links looked like they could be a bit tenuous as all Kim had done was befriend a group of neo-Nazis on Facebook after attending an Oi! Gig in London. 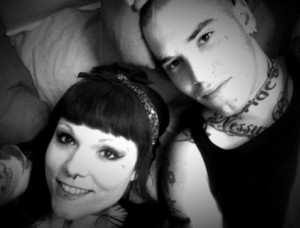 Kim and David sharing a moment.

The revelations caused what Kim described as a “shitstorm” of “massive proportions”. She released a statement explaining that she was an anti-fascist, had accepted the friend requests to her personal profile (she has a public profile with thousands of followers) without properly checking they weren’t neo-Nazis. One of them might have done her boyfriend’s tattoos but having a saying associated with the Italian far-right as a tattoo (Nessun Rimorso) as well as flags of various European countries doesn’t mean David was a nationalist, he was just a skinhead who likes Oi!, isn’t politically active and doesn’t really like the far-right.

In her statement Kim explained that when she’d met members of the gang at the gig in London they had been very interested in animal rights. This shouldn’t be too surprising, rumours claim Hitler was a vegetarian and neo-Nazis across Europe have been making efforts to infiltrate animal rights groups to gain legitimacy. In the UK the neo-Nazi kids from youth group National Action have recently been trying to get involved with the anti-badger cull campaign. While last year an international animal rights gathering in Belgium was disrupted after the presence of fascists was revealed by French anti-fascists. 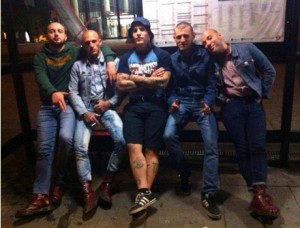 Now it looks like Kim’s broken all contact with the neo-Nazi gang she was connected to by anti-fascists back in 2012. She doesn’t appear in any of their recent Facebook photos and we’ve not seen any videos of her at gigs where Nazi salutes are being thrown since 2012. But we found this Nazi selfie on Rizzo’s facebook page from a trip to London in June this year. It’s him on the left and David’s at the back. Is this Kim on the right? 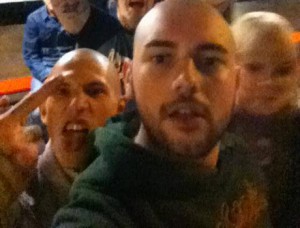 Nazi selfie: David appears triumphant behind neo-Nazis Elia Rizzo and Elia Cicccio Cristiano. But is this Kim on the right?

London Anti-Fascists explained why they had been investigating the shop: “Camden is a mecca for all manner of sub-cultures which historically has included the neo-Nazi music scene. This still occurs, to a lesser extent, today and we were concerned that the place could again become a magnet again for their obviously neo-Nazi friends. We believe the presence of racists, organised or not, and those who associate with explicitly racist/white power music scenes, pose a direct threat to people of colour and those who take ideological opposition to racist and fascist ideas.

“Kim K has previously stated she is opposed to Nazi ideologies, but she still has no problem hanging out in Camden with known neo-Nazis,” they added. She might not be a neo-Nazi herself but her claims to be an anti-fascist are clearly bullshit.

This article was shared by us in hopes of bringing more light to this situation and the issues involved and was originally posted anonymously circulated around this time last year.