It’s been an open secret for a while that Nathan Block (better known as “Exile”), a former Green Scare prisoner who served a number of years in prison for several Earth Liberation Front actions, has become a fascist. This has been known not just through numerous personal accounts from Olympia, but from copious postings on his tumblr blog Loyalty Is Mightier Than Fire (Exile has confirmed to local anti-fascists that the blog is his). 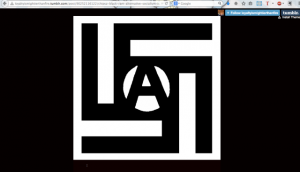 (Do you believe Anarchism and Nazism are compatible? All the anarchists killed by fascists could not be reached for comment.)

If you are unfamiliar with the more obscure references to Nazism and the postwar fascist movement, except a few decorated swastikas, Exile’s blog might look like a creepy spiritual goth kid’s elaborate art project. However, if you understand the references, it is immediately obvious that Exile is going out of his way to promote a slew of fascist writers and imagery, especially those influenced by Esoteric Nazism and other forms of mystical fascism.

The most prominent is Julius Evola, an Italian Traditionalist philosopher who attacked the “modern world” as decadent and corrupt. (Evola is the go-to guy for fascists who want a Situationist, Frankfurt School, or anarchist-style critique of capitalism and the consumer society.) Evola worked for the Nazi SS and was the main intellectual figure in Italy’s vibrant postwar fascist milieu. Third Positionism – an anti-capitalist, racial separatist, and ecological version of fascism – has its origins partly in Evola. The very title of Exile’s blog comes from a quotation in one of Evola’s most famous political books, Men Among the Ruins, and Evola quotes are found throughout the blog. Exile has told people that “Evola will show us the way.”

Exile also likes to quote Miguel Serrano, a postwar esoteric Nazi from Chile. Serrano, along with the better-known Savitri Devi, promoted worshiping Hitler as a deity. Serrano wrote numerous books about Hitler. These ideas of Esoteric Nazism have influenced the spiritual parts of the neo-Nazi movement such as the Hitler-worshipping New Order organization (formerly the American Nazi Party).

In addition to these obscure Nazi references, Exile’s blog contains a slew of other Nazi images, including swastikas, as well as black suns and runes used by the Nazis. Some of these images are reproduced below; they are taken both from his tumblr, as well as from his “Likes” on other tumblrs. 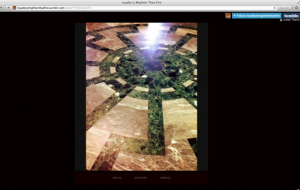 (This photo of a black sun comes from the floor of the General’s Hall at SS leader Himmler’s castle in Germany.) 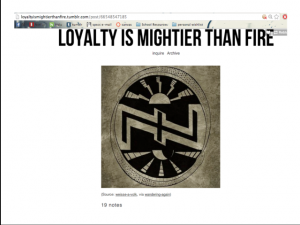 Although they live in Olympia, both Exile and his partner Joyanna Zacher (aka “Sadie,” another former ELF/Green Scare prisoner) were associated with the Eugene, Oregon Green Anarchist scene in the late ’90s and early ’00s. They also have a long history of sketchy racist politics, as did an early contributor to ‘Green Anarchy’. (It is also worth noting that another ELF activist, Chris McIntosh, turned to White Supremacy while in prison.) Exile and Sadie’s first post-sentencing statement ends with a reference to Charles Manson’s racist ecological philosophy ATWA (meaning either “Air Trees Water Animals” or “All The Way Alive”). Sadie repeated this formulation as late as 2012 in a letter from prison to the Earth First! Journal. Both in prison and out, Sadie and Exile have repeatedly made disparaging remarks about people of color, and Exile has made statements supporting white separatism, which Sadie defended when Exile was rightfully called-out for making them. Today, Exile and Sadie are part of the Black Metal scene in Olympia, where white separatist attitudes hold sway among at least some members of that scene.

The Pacific Northwest is an overwhelmingly white area because of the historical legacy of the extermination of Native Americans, the exclusion of African-Americans in Oregon, and the later regional popularity of the Ku Klux Klan. At the height of the neo-Nazi revival in the 1980s and 1990s, major Third Position racist organizers were based there. Along with other racists, they tried to turn the entire region into an all-white ethnostate. So it is no coincidence that Exile’s turn to white separatism occurred there.

It is also not a coincidence that Exile is embracing this trend today; crypto-, esoteric, and Third Position fascism is in vogue all over the United States and globally. This is part of a slew of active non-traditional fascist and white separatist organizing and cultural projects that promote obscure variations of fascism, white separatism, anti-jewish or anti-muslim conspiracy theories, as well as patriarchal and homophobic attitudes – all with vocal opposition to modernity and capitalism, and in support of environmentalism and animal rights.

It wasn’t that long ago that the now-liberal cities in the Pacific Northwest were home to a series of racially motivated murders committed by fascists. In 1988 in Portland, Oregon, Nazi skinheads associated with Tom Metzger’s Third Positionist WAR (White Aryan Resistance) murdered Mulugeta Seraw, an immigrant from Ethiopia. In Olympia in 1992, two WAR-associated Nazi skinheads murdered anti-fascist punk Bob Buchanan, Jr. in downtown Olympia.

While the skinheads’ politics encompassed a more familiar vulgar Nazism, they espoused the same ideas as the fascists of today – white separatism, criticism of global capitalism, environmentalism, and outreach to the radical left and counter-cultural scenes. Exile is part of this trend and this fascist history, and he should be excluded from all radical cultural and organizing spaces, and treated like the fascist he has become.

Here are some examples of things Exile posts: 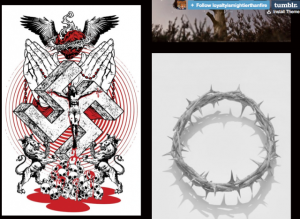 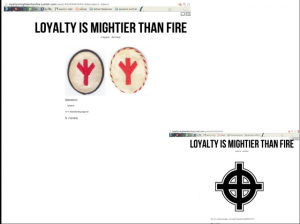 (The rune on the top is the “Algiz” or “life rune” which was used by the Nazis; the neo-Nazi National Alliance is also a fan. At bottom, is the Celtic cross, which is a well-known white-power symbol.) 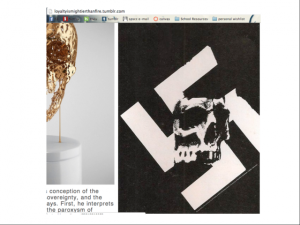 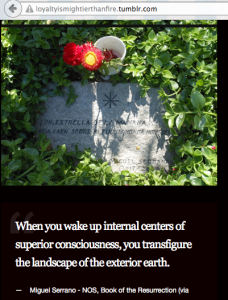 (Serrano was a Chilean fascist who promoted worshiping Hitler as a deity.)

(Julius Evola is the go-to fascist for other fascists who want a serious intellectual reference.)